Key to the Sacred Pattern 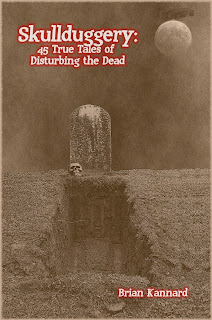 As many of you who regularly check out Grail Seekers, I haven't been posting too much over the last couple of months.  That's because I've been working on a book that has finally made it's way into print.  Skullduggery: 45 True Tales of Disturbing the Dead is a slight departure from the subject matter I cover here on Grail Seekers, but there is some common ground.  The write-up for the book on Amazon is as follows:

One of humanity's greatest unspoken fears is having our mortal remains desecrated in the grave. These fears reach as far back as the ancient Egyptians and are as close at hand as today's headlines. Skullduggery examines 45 real life tales of those who would disturb the dead's eternal slumber. Discover the post-mortem histories of Elvis, Groucho Marx, Charlie Chaplin, Thomas Paine, Alexander the Great, Eva Peron, Graham Parsons, Che Guevara, Albert Einstein, The Skull and Bones Society, and others who were not allowed to rest in peace. The motivations for these ghoulish crimes range from greed and avarice to pure affection. Once you step into the world of Skullduggery, you will never pass by a cemetery at night without considering what forces are at work in the dark.

You can find out more about Skullduggery and check out samples at the book's web site.

Posted by Unknown at 07:15 No comments: Links to this post

On paper, it sounds too good to be true.  A video from a Yale Freshman was released on You Tube with a caption of a "look inside the courtyard of Yale's oldest secret society".  According to the Yale Daily News, the You Tube user name Dauphinish, left Yale in 2007 due to a medical condition and has since transferred to Branford College.  Since being at Branford, Dauphinish has been receiving death threats and was involved in a hit and run accident.  All of this transpired after Dauphinish bragged to friends that he had broken into the headquarters of the Skull and Bones Society, known as The Tomb, and filmed a video.

At the end of this page is the video supposedly filmed at The Tomb by Dauphinish.  There's some creepy scenes of Dauphinish entering a dark passageway. There's a coffin at the end of the passageway and what looks like bones scattered on a dirt floor.  Spooky as the You Tube piece is, is it worth death threats and a hit and run?

I've always been of the opinion that all powerful secret societies don't mess around with dime store tactics such as death threats and hit and runs.  If you've hacked off the masters of the universe, you're going to pay the price.  If the Skull and Bones Society is capable of stealing the skulls of Pancho Villa and Geronimo, placing Presidents on the throne, and any other conspiracy linked to the group; they are capable of successfully knocking off a college Freshman. After viewing the video, judge for yourself what price might be exacted from the uber-secret society for wandering on to their turf.

In my new book Skullduggery: 45 True Tales of Disturbing the Dead, I've included a chapter that looks into some of the alleged skull thefts of the Skull and Bones.